If you can’t handle the felines, best to either turn away now or scroll to the bottom as the glorious orange fur will soon be flying.

Ok, everybody gone that needed to leave?  It’s just us cat lovers now.  We now return to our regularly scheduled program.

This is Kafka.  He had to go to the vet today because he had a growth under his chin.  Mama was worried as it seemed to be growing quickly.

Luckily dad was able to get Kafka into a carrier (and only lost a little bit of blood… not bad, dad) and off to the vet.  Some great news – Kafka, as you may have noticed, is a chubby tabby.  Mama likes ’em kind of chubby and cuddly.  Especially her tabbies.  And Kafka is happy to oblige – he’s obsessed with his food, and everyone else’s as well.  Today we found out that he weighs exactly what he weighed at his last vet visit – 16 pounds – so he’s kept off a little bit of his chub.  The vet was surprised – she said that fat cats usually swing in weight – so Kafka did us proud.  Unfortunately his chin was also on the chubby side, and the vet said that it was an abscess – and that’s why it was getting so big, so fast.  She would drain it with a needle and syringe (and apparently he managed to fill up an entire syringe with the icky stuff that was inside his growth)! 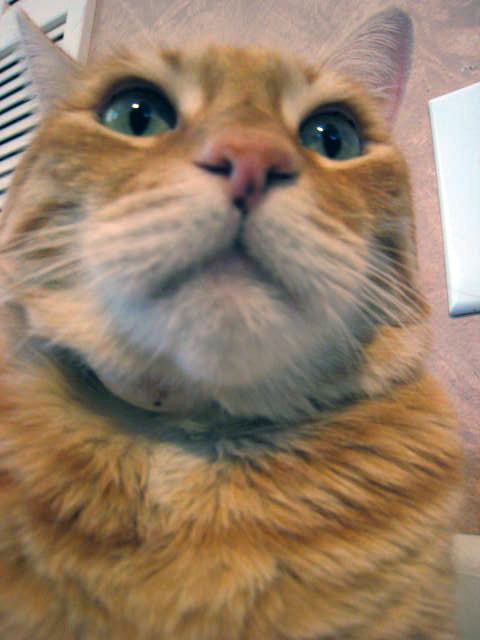 You can see that he got a little shaved under his chin, and that’s the spot that the needle did it’s work.

So far so good, he’s going to get pumped with daily antibiotics and – I’m sure – treats, so here’s to hoping that he makes a speedy and full recovery.  It’s amazing that he’s never acted sick at all – I’d be milking this for some “treats and sympathy”…

Tonight there was some mail for me – a little something from the folks at Greenies!

They’re Pill Pockets treats – made to try to disguise pills when we have to take them.  I can tell you from the get-go that they just aren’t going to work.  Firstly, I don’t need to take any pills right now, and secondly, well, how hard is it to distinguish a nasty pill inside of a tasty treat?  Roll ’em around in your mouth, spit out the pill, it’s SIMPLE.

Oh look – they also sent some for felines.  This is Sekhmet.  She was willing to take one for the team and try one, but she doesn’t need any medicine right now either.  But she’s happy to help…

Instead I got to munch on one of these Whole Meals bars.  We got them at the Pets in the Pearl event, and haven’t had a chance to try them yet.  The bag smells good…

Oh yeah, this seems like it will do the trick…

3 thoughts on “The Great Kafkinski”