Bogart Does the Old LA Zoo 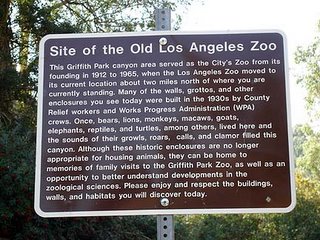 The new LA Zoo looks fabulous… not that I’ll ever get to find out, being a dog and all. Believe it or not, they don’t allow dogs in with all the other animals! I guess that just confirms my belief that we’re a superior species…

So we took a long walk today by the “old” LA Zoo. 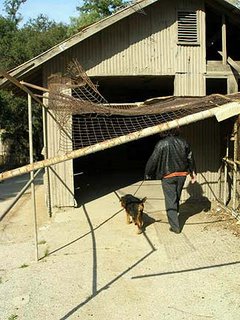 It’s the abandoned zoo that opened in 1912. It’s incredibly cool to walk around and see the old cages and enclosures that were probably state of the art at the time, but now look all crumbled. I’m sure those animals weren’t happy in those small cages (I just think about how much I hate my crate and I can sympathize). 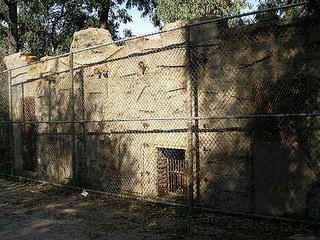 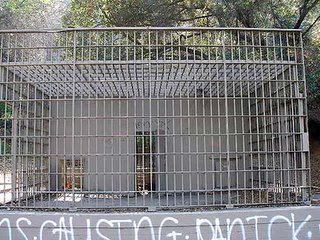 Now it seems more like an area where teenagers go to drink cheap beer. In a few of the cages and buildings that are still open (not covered by fences) there are a lot of empty beer bottles and packaging. That’s a shame – at least take your garbage with you kids! 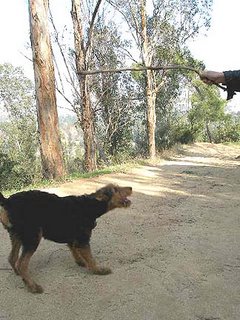 So first we started out with some stick-work – the humans seem to really like to watch me jump high in the air to grab a yummy stick then slightly pull it away so that I have to jump yet again. I don’t really mind… I’ve got easily 10x the amount of energy of the two of them combined, so all I can say is, “Bring it On”…. 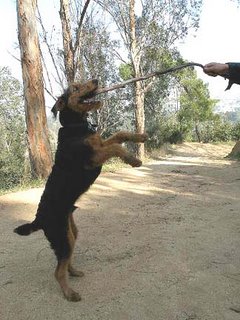 Then it was time to do some exploring. It’s pretty nice up here, not nearly as hot and sunny as when we go into the canyons up by the Observatory. Lots of pretty shade and greenery. Here I am posing with dad just after running away to grab a drink from a stinky pool of water (mom and dad said they were mad, but I’m pretty sure that they meant to say they were proud). 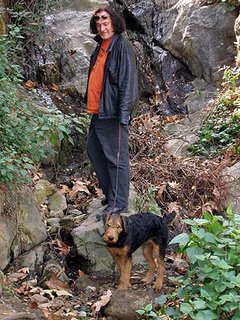 I’m always meeting new cool dogs, and today was a canine bonanza! And for the first time in awhile, they were all friendly and wanted to play! Yippee! 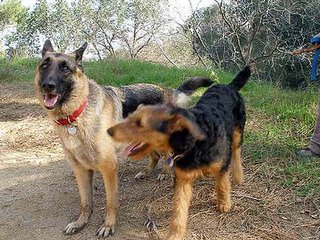 This is Lucky, a German Shepherd, about 2 years old. He was really fun, and I’m almost as tall as he is! 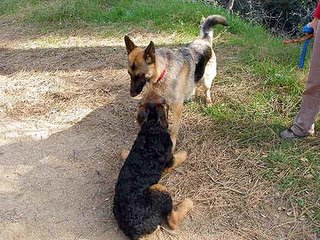 He gave me quite a workout, but I think I surprised him with my patented running in a circle trick where I just run around and around and around until the other doggie gets tired of watching me, then I pounce! 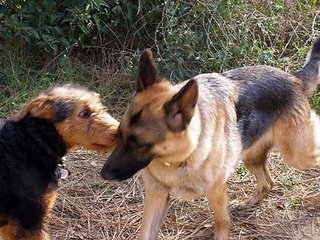 He also had an amazing trick, it was called the “Butt Blaster”. I heard his mom and dad talking about it, then he did it to me! While I was running around him he got into just the right position and then smacked me with his butt! I thought it was hysterical, and tried to jump on top of him to show him how much I appreciated his great mind – You the Man, Lucky!!! 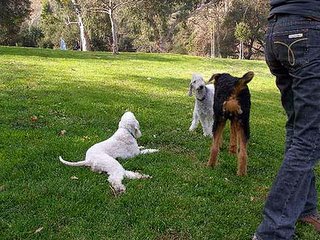 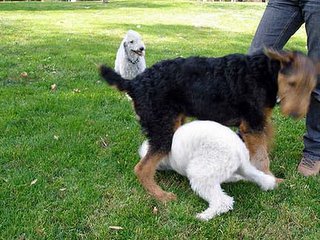 On top of all of that, I got to meet two Bedlington Terriers! They’re so cute, they look like little lambs. One of them was named Henri, and he and I decided to burn off a little puppy energy and chase each other around and around. It was so much fun! I’m always excited when I meet other dogs, especially terriers, as there are so many different kinds!!! 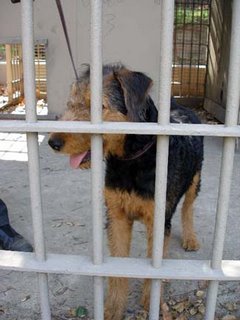 Then for some reason, mom and dad thought it would be funny to lock me into one of the old lion cages. I found this to be less than pleasing. Mom was laughing a lot and dad was pushing me into the cage. I must remember this injustice and find a quick way to remedy their behavior (pooping on the terrace tonight should do the trick). 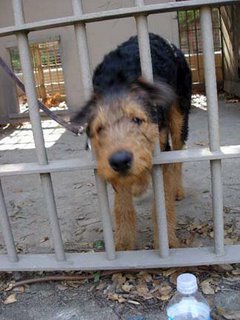 So now I’m tired – time for puppy sleep – in between all of the fireworks going off in our neighborhood! We do live right next to Chinatown, so Happy New Year of the Dog to everyone!!!

One thought on “Bogart Does the Old LA Zoo”