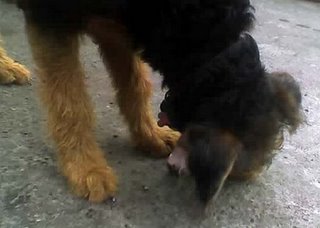 Today dad took me to the butcher shop – he’s been raving for the last two days about making me homemade food (I’m just not a big fan of the canned dog food – how do you all eat that stuff?) and yesterday he made me a “chicken soup for the airedale soul”… chicken pieces with pasta in a soupy sauce. Yum yum yum. I think it’s my favorite food so far, outside of treats.

So of course we needed more meat, and dad thought that the butcher would be the right place to go – back when he lived in Vienna he used to go to the butcher all the time to get stuff for his German Shepherd named Schnuff, and would make him homemade food with all sorts of goodies in it. But mom is vegetarian, she doesn’t really like the smell of homemade dog food cooking or sitting around, so dad has to make it during the day while she’s at work.

At the butcher dad asked if he had any bones for me – and he came out with the biggest bone I’ve ever seen. I was in absolute doggie heaven. The butcher cut it up into smaller pieces (I was willing to take it on full size, but dad rightly assumed that it would be better if cut into doggie-mouth-sized pieces) and then I got some. Mmmmmmmmmm. 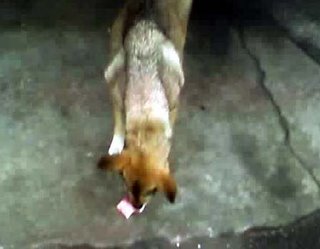 We thought we might share some of our bounty with my girl – Ferocious. So we drove over and she and I did a little fighting, then we did a little bone crunching together. She’s still as full of oil and grease as ever, and she’s still my girl.

Ah, life is GOOD! (except for the grainy pictures from dad’s cell phone….)