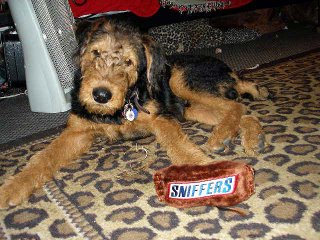 My mom has a great friend in New York, he’s an artist named David Remfry. He’s one of her very favorite people in the whole world – whenever she talks with him on the phone, they laugh like hyaenas. She used to be one of his models too, I’ve seen the pictures that he drew of her and the paintings and they look just like her so he must be good…. The funny thing too is that when mom was telling David that she had just gotten me, he told her that he had a dog named Bogey when he was little! So now they both have Bogeys…. (the other Bogart was a Scottish Terrier). 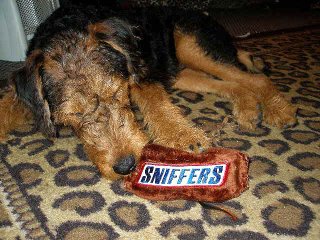 I like him even more now – he sent me a present! It’s a Sniffers bar – just like the ones that mom eats, except that mine is bigger and furrier (and of course, no chocolate for me). It’s got a great squeaker and I insisted on bringing it to work with mom and me today. 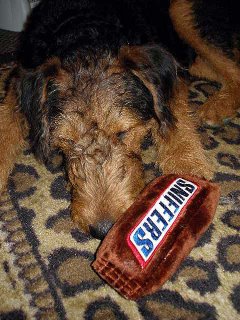 He also sent a present for the kitties – a Kitty Spliff! You should have seen Kafka the orange tabby with that fattie hanging out of his mouth, all hopped up on catnip… we’ll try to get a picture of him with it, it’s hilarious!!!