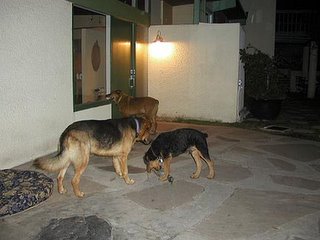 Ok, I’m going to start this out by saying that I have no idea what all the fuss is about.

Yesterday was my first Christmas, and mom and dad took me over to their friends house – Stephen & Sharon – so I could play with their doggies. I’ve never met them before, the German Shepherd is Oliver, and the avocado-shaped dog is Sneaky. At first no one was sure if we would all get along, but my charm and wit won over the older doggies and we had so much fun. Running and jumping, chasing and play-biting, fetching and humping…. 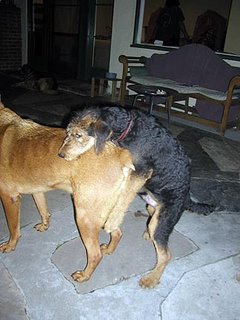 Wait, did I just say humping?

That’s what the humans called it. I can’t explain it. This sudden urge just came over me to grab onto Sneaky and just hump away. Was I trying to show dominance? Am I sexually maturing? Was it just a funny game? Damned if I know. All I know was that I was absolutely powerless to resist the giant butt of the neutered Sneaky. 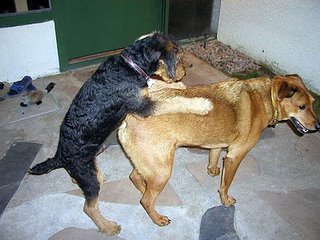 Sneaky was quite patient with me for most of the evening, as I just couldn’t control myself once I’d started. Oliver looked on, amused, and just glad that I didn’t find him nearly so attractive. 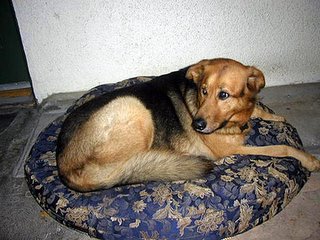 The humans were inside, cooking and eating until a very late hour. By this time my romantic antics were thoroughly rebuffed by an annoyed Sneaky and we were all gathering around the door begging for some chow. It came in the form of several bowls of turkey pieces, which I haven’t had before and I gobbled down (mom thinks that’s funny…).

I did get presents earlier in the day, luckily I wasn’t in mom’s office so I didn’t have to deal with THAT TREE. Some special food in the morning and a few little gifties made me a happy dog.

Hope your Christmas was great and you managed to cajole your humans into getting you exactly what you wanted this year!!!!