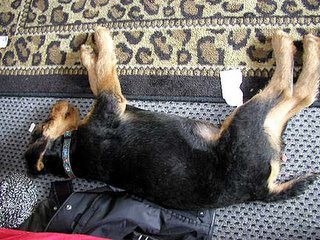 Mom says that today is a day when most people eat a lot of turkey – well, she doesn’t eat turkey (or any meat, how weird is that?) and since we’re not having a lot of people coming over to the house to admire me (or for any other reason), we’ve spent the morning watching TV. First it was the Macy’s Parade and wow did that look scary… those crazy balloon things and everybody screaming and people pretending to sing on floats. Not for me.

I’m staying here and watching the National Dog Show. So far it’s been really educational, I haven’t run into dogs that look like most of the doggies I’ve seen so far. But then the terrier group came up and mom got really excited… there was an Airedale there but they didn’t show him getting all felt up by the judge or doing his runaround, we just saw a little of him at the end. But he won 2nd place!!! He was a good-looking Airedale, with a really nice beard.

So I lifted my head for the Airedale 2nd place finish, then dropped it to the floor again and made my grumbling noises. Back to sleep. 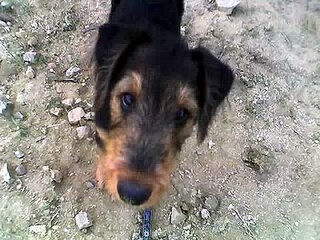 But dad had other ideas… he wanted to take me for a hike so off we went into the Hollywood hills! I’m getting better at this hiking thing, much better than before. I even complain less (but I’ve decided not to drop that completely – you never know when it’s going to come in handy to whine and give the “cute airedale face”).